Color: When wet, sea lions are sleek and appear black in color. When dry, their coarse hairs take on a velvety feel, and they range in color from a light tan or golden blonde in females to a chocolate or dark brown in males.

Range: The western shores of British Columbia, Canada, the U.S., and Northern Mexico. 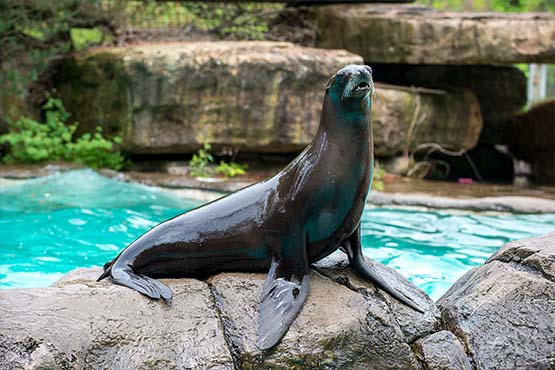 Sea lions are opportunistic feeders, eating what is abundant and available including squid, octopus, hake, northern anchovy, opaleye, herring, Pacific whiting, rockfish, and when available salmon, lamprey, and benthic fishes. A sea lion needs to eat about 5-10 percemt of its body weight each day.

Mating season is primarily May and June and gestation is 11 months. But sea lions have delayed implantation of 2 to 3 months, which allows pups to be born during the summer when food is more abundant. Males become sexually mature between 5-9 years; females at four to six years. Litter size is normally one pup, but twins are born occasionally. Newborn pups are usually about 30 inches long and weigh between 11 and 19 lbs. They are born with their eyes open and can swim (though awkwardly) right after birth. They can vocalize, too, which helps mothers and pups recognize one another.

Location in the Zoo: Kids Kingdom