As she aged, Zakula developed arthritis, an age-related illness that affected her ability to walk and move. For years, despite her arthritis, Zakula still managed to keep up with the other gorillas. She was often content to just sit in the outside yard, interacting with her troop family. But she was still independent and was not limited by her arthritis. In fact, keepers had designed a special ramp to make it easier for her to move to the outdoor yard, but Zakula still chose to take the stairs with the other gorillas.

Veterinary and animal staff continued to manage Zakula’s condition as much as possible. In December they noticed Zakula preferred to stay inside her room and not join her family in the public indoor or outdoor areas. Keepers designed a multi-layer straw and hay bed where she snuggled with her favorite blanket and rested comfortably. Keepers spent time quietly sitting with her and brought her favorite food directly to her.

As her quality of life declined, keepers met with veterinary staff and Dr. Barbara Baker, President and CEO of the Zoo, to discuss Zakula’s condition. Zakula’s quality of life was declining quickly and though she was in no pain, she was no longer able to get up and move. The very difficult decision was made to euthanize her. Zakula was the seventh oldest gorilla in a North American zoo. In their native rainforest habitat in central Africa, Western lowland gorillas can typically live up to 35 years.

Zakula was a great ambassador for her cousins in the wild for more than five decades. She enabled visitors to learn about the plight of gorillas in the wild through their connection with her. Western lowland gorillas are endangered due to habitat loss and human-gorilla conflict.

Zakula will be deeply missed by her gorilla troop, visitors, keepers, and the entire Zoo team. 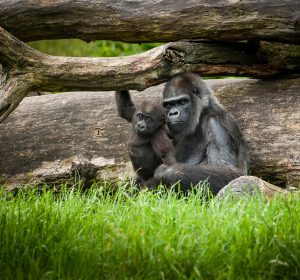 Zakula with her grandson, Ivan.