GET YOUR TICKETS TO VISIT SMILEY!

(Pittsburgh) (June 22, 2020)—The Pittsburgh Zoo & PPG Aquarium is celebrating the birth of a new California sea lion pup! Kelilah gave birth to a pup on Wednesday, June 10. Both mom and pup are doing well!

“We are all very excited and happy for Kelilah,” says Henry Kacprzyk, curator of Kids Kingdom.

Eat’n Park Restaurants partnered with the Zoo to name the sea lion pup “Smiley.” According to Eat’n Park’s Chief Marketing Officer Kevin O’Connell, “We like to make people smile, and sea lions are pretty good at that, too! ‘Smiley’ seemed like the perfect name to share with the new pup.”

Once Kelilah and Smiley get a little more acclimated, the veterinary team and animal care specialists will exam, weigh, and determine Smiley’s gender. The team will not interfere unless Smiley isn’t nursing or stops communicating with Kelilah.

“The next big challenge for Smiley will be when Kelilah begins the first swimming lessons in a couple of weeks,” says Kacprzyk.

Visitors can see Smiley the sea lion pup on exhibit at the Zoo in Kids Kingdom now!

Sea lions normal total gestation is eleven months, which can include a delayed implantation of an additional two to three months. Pups are generally born in the summer when food is more plentiful.

Sea lions normally give birth to one pup, but on rare occasions, twins have been born. Sea lion pups are born dark brown to black, but will fade to light brown within a couple of weeks. At birth they are well-developed and can move, scratch, and groom themselves. Swimming will occur when the pup is a couple of weeks old. 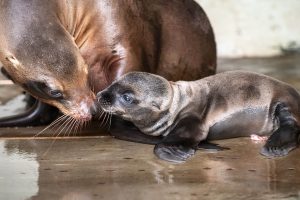 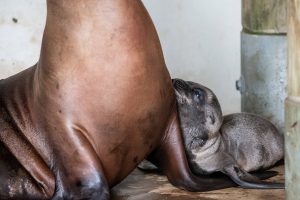