Length/Height: When males stand on their back legs, they can reach heights of 10 feet 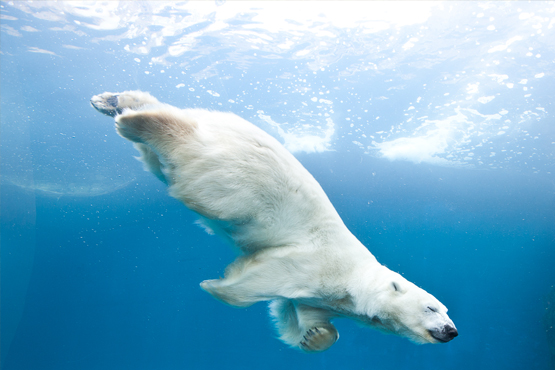 Polar bears spend about 10 to 20 percent of their day in the water.

Polar bears are the world’s largest land predators. They feed mainly on ringed seals and bearded seals. They use their large front paws for hunting seals. When the seal comes up for air, the polar bear kills it and flips it out of the water with a single blow of its paw. When no marine food is available, they feed on vegetation, but this is not their ideal diet.

A newborn polar bear is usually 12 to 14 inches long and weighs a little over one pound. Polar bears reach sexual maturity at three to five years of age. The mating season lasts from March to June. Before mating, a female may be accompanied by more than one male. Mating may occur for several days to ensure fertilization. The total gestation period is about eight months. Females dig dens in snowdrifts to protect their cubs from the harsh winter temperatures. A litter usually consists of two cubs. Cubs usually stay with their mothers for about two-and-a-half years.

Polar bears have up to four inches of blubber to help keep them warm. Their fur actually has a hollow core and is transparent. Polar bear skin is black, which helps it to absorb warmth from the sun in their cold native range.

Polar bears are recognized as vulnerable by the IUCN. They are threatened by global warming and the corresponding lack of sea ice which allows them to hunt. They are also threatened by illegal hunting, chemically contaminated prey, and humans taking over their land.

Location in the Zoo: Water’s Edge