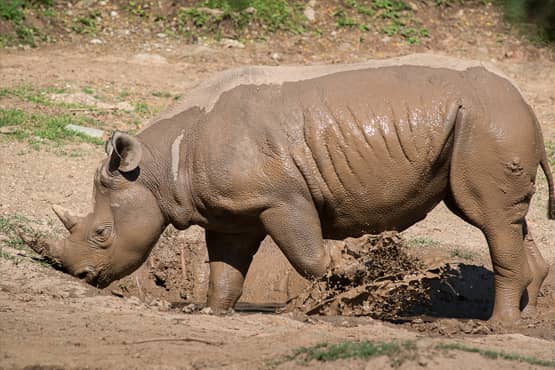 Despite its name, this animal is actually gray in color, matching the mud the rhino chooses to roll in.

Black rhinoceroses communicate their territory with other animals by scent marking, grunting, and snorting. The two horns of the black rhinoceros are made entirely of hardened hair. Rhinos can’t see very well, and anything farther than 35 feet away from the rhino appears blurry. To make up for this poor eyesight, rhinos have an excellent sense of hearing.

Female rhinos give birth to a single calf after a 15-month gestation. Babies stay with their mothers until two or three years of age, which is when the mother will typically have another calf.

This animal is an endangered species because of poaching. Rhino horns are used for dagger handles and traditional medicines, although there is no scientific evidence that the horn has any medicinal powers.

Schedule: On exhibit in warm weather only