What are the penguins doing?

The penguins spend time both on land and in the water. Their torpedo-shaped bodies and strong sturdy wings make them agile swimmers. When they nap, they often like to turn and face the rockwall while doing so. Penguins are animated and social. You will often see them enthusiastically interacting with each other. If you see two penguins making a bowing motion towards each other, they are most likely mates and greeting each other. You may also spot some special enrichment items that keepers have given them, such as a bubble machine, treats in ice, or holiday items for them to explore.

If you see a penguin being taken off exhibit or you do not see any penguins, there are a few possible reasons:

We have two species of penguins here at the Zoo, gentoo penguins and macaroni penguins.

Macaroni Penguins: These penguins are one of the largest species of crested penguins. They have a characteristic golden tuft of feathers on the top of their heads. These feathers inspired their name when 18th century English explorers first discovered them in Antarctica. The gaudy feathers reminded them of the macaroni fashion that was popular at the time, which included flamboyant clothing, hairstyles, and plumed hats.

Gentoo Penguins: Gentoo penguins are slightly larger than the macaroni penguins and they do not have any yellow feathers. They also have the “tuxedo” black and white coloration along with red-orange beaks, as well as white-feather caps on either side of their heads.

Q: What are the rocks for?
A: Both species of penguins here at the Pittsburgh Zoo & Aquarium use rocks to build their nests. At the beginning of breeding season, we place one ton of river rocks in the exhibit and holding areas, for birds to begin building their nests. Nest maintenance is always ongoing, so you may see birds moving or swapping rocks all throughout breeding and nesting season.

Q: Why are some penguins laying on the rocks?
A: Once eggs are laid, they need to be incubated or kept warm. Both the males and females take turns sitting or lying on the eggs around the clock, keeping them warm and safe.

Q: How many eggs does each female lay?
A: Typically, each pair has two eggs.

Q: How long do they take to hatch?
A: For both species, it takes approximately 35 days from lay date to hatch date.

Q: Does staff monitor the eggs?
A: To assess whether or not an egg is fertile, we briefly remove the egg and “candle” it. Working with our animal health team, we take the egg into a dark room, and hold a curved flashlight up to the egg. If fertile, you can see the vessels developing, and it later stages of development, you may even see the chick move and flutter inside! The egg is then quickly returned to the penguin parents on the nest.

Q: Can we see the chick once it hatches?
A: The chicks are small when first hatched, and remain underneath their parents for warmth and protection, but you may catch a glimpse of them when the parents feed.

Q: How do the parents feed the chick?
A: The parent eats fish and digests it into a gruel. This gruel is then regurgitated to the chick.

Q: How quickly does the chick grow?
A: Penguin chicks grow quickly. By the end of summer, chicks will be full size and starting to grow in their adult feathers!

Q: Can the chick swim?
A: The fluffy down feathers covering penguin chicks is very insulating, but it is not waterproof. Until they fledge and get their adult waterproof feathers, it is dangerous for chicks to be near the water. For this reason, we move any chicks that are born onto exhibit, along with their parents, to our holding area once the chick is big enough to begin exploring. Their safety is our priority. Once the chicks have their adult feathers, we begin reintroducing them into the exhibit.

Q: How can you tell males and females apart?
A: You cannot identify male and female penguins simply by looking at them – they have no external characteristics of sex. A blood test is done on chicks to determine their gender. Here at the zoo, we rely on ID bands to identify each bird, along with their sex.

This button will give you control of the camera for one full minute.

2. Select the “eye” button in the top right corner. 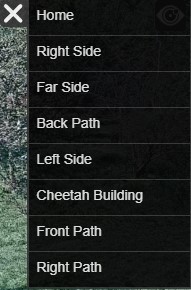 4. Still don’t see any? Here are some reasons why.