Range: The Amur River Valley in the Russian Far East, in Northern China, and Southern Russia in Asia. They no longer inhabit Siberia. 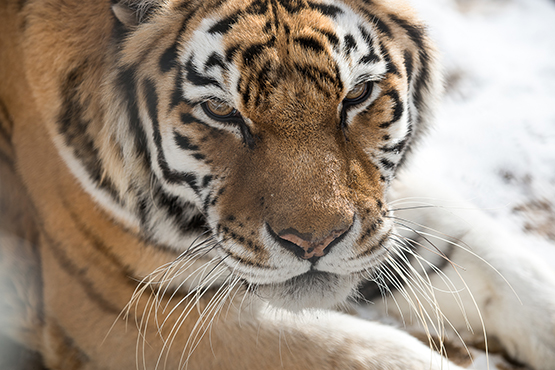 Although often referred to still as Siberian tigers, the range of these tigers has drastically reduced and they no longer inhabit Siberia.

The tiger is the largest living feline, growing up to 10 feet in length and weighing up to 675 pounds. Much like a fingerprint, a tiger’s stripes are variable between individuals with no two tigers looking just the same. These tigers eat deer, antelope, wild cattle, and wild pigs. They can move extremely swiftly over short distances and they are excellent swimmers. Tigers hunt at night, ambushing their prey.

Amur tigers reach sexual maturity is three years for females and four years for males. Like most cats, tigers are induced ovulators. A female tiger signals she is in estrus through behavior, scent, and sound. Once a male finds a mate, copulation is continuous for a five day period. The gestation period is approximately 103 days. Amur tigers are endangered. Since the tigers are at the top of the food chain, survival of the species is dependent on maintaining and enlarging their habitat and protecting them from poachers. At one time, there were eight tiger subspecies. Only five remain now and even they are on the brink. The tiger population reached an all-time low of 24 animals in the 1940s. Because of survival programs, that number has grown to an estimated 400.

Location in the Zoo: Forest Passage