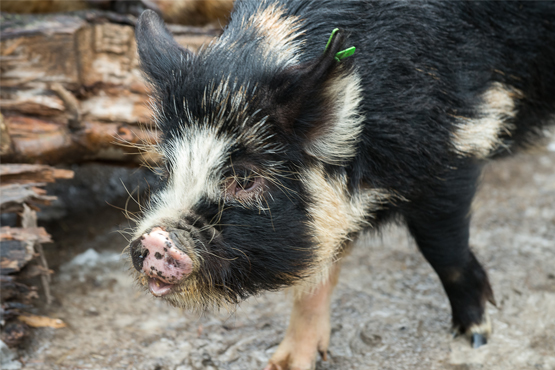 When kunekune pigs were brought to New Zealand, the Maori people gave them the name “kune kune,” which means, “fat and round.”

Although their native range is now New Zealand, it is believe that wild kunekune pigs were originally brought to New Zealand from Asia. Kunekune pigs are domesticated and are often found on farms or kept as pets in urban areas.

One of the characteristics that make kunekune pigs unique are their piri piri, which are the ornamental tassels that hang from their lower jaws. Although not every kunekune pig has piri piri, it is one of the notable markings of this species. Their coats come in a variety of colors and patterns, ranging from solid colors to a mix of colors in a variety of patterns including spots or speckling. Their hair can also be a variety of lengths and textures, and can be straight, curly, or anywhere in between. Kunekune pigs’ hair changes dramatically throughout the year, thinning and sometimes falling out in the summer and thickening in the colder months.

Kunekune pigs were nearly extinct in the 1970s, but thanks to conservation efforts their populations were stabalized, although they are still considered exotic pets in some places.

Location in the Zoo: Kids Kingdom