Zoo U. Students Grow from Learners into Leaders in Yellowstone National Park
Share:

A beautiful sunny morning in the Lamar Valley of Yellowstone Park was the first day of seven that a group of 12 Pittsburgh Zoo & PPG Aquarium Zoo U. students would experience an amazing adventure. They went from learning about conservation research in the classroom to active participants in the field. The students worked with the National Park Service, U.S. Forest Service, and even met with researchers with the Wolf Pack project. It was a whirlwind week that challenged the students to meet new challenges, think outside the box, and experience wildlife in a way they never had before. 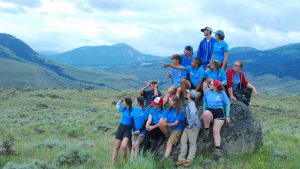 On the first day, the students hit the ground running when they met with the National Park Service for their first assignment. The students were to conduct a survey of hikers for bear safety behaviors along the park’s trails. The message to hikers is that bear spray is only effective if it is readily accessible at a moment’s notice. The National Park Service wants to analyze the collected data to have a more complete understanding of the habits of park visitors as it relates to receiving, understanding, and responding to bear safety messages.

The students were assigned three different trails. The first trail, Beaver Ponds Trail, is a lightly traveled trail located near a highly populated tourist area. The second trail, Hell Roaring, is a more remote backcountry trail with less park traffic. And the third trail, Norris Geyser Basin, is a popular high traffic boardwalk. The students observed hikers on each of the trails to determine if hikers heeded the bear spray warnings and if the bear spray was easily accessible for the hikers. The students found hikers on the more populated trails such as Beaver Ponds Trail and Norris Geyser Basin were less likely to heed the bear spray messages, but those who hiked the less populated and more remote Hell Roaring trail were more safety conscious and kept their bear spray easily accessible. 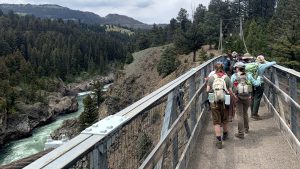 Their second adventure was to participate in a field study program in Yellowstone National Park tracking down female bison wearing GPS collars which provide and transmit valuable information on the herd’s movements.

Students were broken down into three groups, spotters who located the herd’s females wearing the collar, students who located a radio signal, and students using a receiver to pick up the ping from the collar. Over 60 female bison through Yellowstone National have collars equipped with GPS. The students were taught how to identify a male, female, adult or juvenile bison and to accurately complete the data collection sheet.

The first herd of bison didn’t really move about, but the second herd generated a little more excitement. The herd was much closer and their movements forced the students to back up several times. And then a black bear wandered a little close to the group before changing direction and scampering off.

The students spent six hours observing the second herd of bison including collection of fecal samples. They returned a second day and undaunted by a sudden hail storm had another successful observation and collection day. 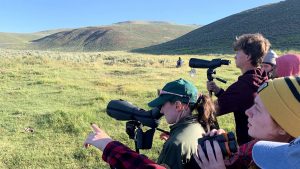 Moving to the U.S. Forest Service, the students assisted in an amphibian study in the Greater Yellowstone Ecosystem. Amphibian species are indicators of the health of an ecosystem. Currently amphibians are in decline. The students were tasked with locating four potential species of amphibians, the Columbia spotted frog, boreal chorus frog, western toad, and western tiger salamander in the twin ponds at the top of the Sphinx Creek trail, an area not yet surveyed. The students recorded any signs of amphibian life. The data collected would then assist the Forest Service to determine which wetlands can and do support amphibian life and which species are located in each of the wetlands surveyed.

While in Montana, the students also volunteered their time for a community service project at the B Bar Ranch. The B Bar Ranch is a working guest ranch committed to operating in a sustainable, organic manner. The students spent their day removing spotted knapweed, a highly invasive plant, from sections of the ranch and U.S. Forest land that borders Yellowstone National Park. The goal is to prevent the invasive plant from spreading into the park. The plant removal involved manual labor. Despite the hot weather, the students tackled the work with a great sense of humor and pride at the amount of area they cleared.

The trip wasn’t all work. They had car sing-alongs, ice cream stops, and pick-up t-ball games plus a chance to go whitewater rafting in the Yellowstone River. The students spotted bighorn sheep, pronghorns, elk, pika, foxes, bald eagles, and even night hawks from the camp site. It was almost like home when they spotted terrible towels and Pittsburgh Penguin posters in several restaurants. The week was exciting, memorable, inspirational, and challenging.

“I’m so proud of our students,” says Mandy Revak, KidScience and Zoo U. Coordinator. “This was the first time we ever had the opportunity to actually get out in the field and learn. It was tough work but they showed great enthusiasm and a willingness to do what was asked. The students had gotten to see Yellowstone National Park and the Greater Yellowstone Ecosystem in a way few visitors do.”

“I am hoping that this is the first of many field opportunities for Zoo U. students in the future,” says Mark Reardon, Assistant Curator of Education Conservation. “Learning in the field is a great opportunity and our students were able to have such a positive impact on the environment.”